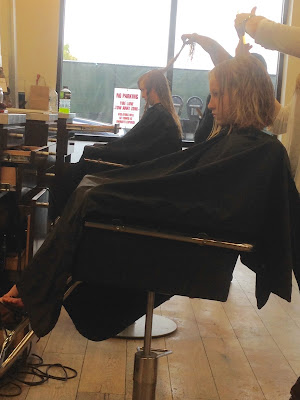 A while back during a school break,  I scrambled to get the girls' hair appointments on a Saturday, as it was long overdue.  Salon appointments are still new to us as we have frequented kid haircutting places and we haven't settled on a regular place yet.  It still seems like a big deal  (to me!) to have a real shampoo, cut AND blow-dry.  As I sat and watched them have their first haircut since August, I had a verklempt moment.  This is not going to happen forever.  Having both girls getting their haircut together and in this moment they are not arguing.  Woo Hoo.

And even mores that we are in the same place doing the same activity.  Riley will be getting her license in a few short years.  They are growing up.  I now drive and drop her off without getting out the car.  Plans are made with her friends by texting and parents are just informed of where, when and how much money.

I see other friend's children growing up right before my eyes.  Attending dances with dates, driver's licenses, high school graduations, and dropping them off at college.

It seems to be happening faster and faster.

After Riley's hour and a half cut which is about and hour and fifteen minutes longer than a trim at the kid's place, she was in a state of shock.  They had cut at least 7 inches off.  The stylist was very thorough with Riley's thick long hair.  We then chatted about how important it was to communicate with the stylist and that was lost as it was Riley's hair but she wanted me to do the communicating.

Unhappy feelings ensued.  Riley was none too pleased and expressed that fully.  And the next morning as we drove to church, I heard again from both girls that too much of their hair had been cut off.

A picture perfect moment and exquisite thankfulness followed by much turmoil and not so much thankfulness. Life runs the whole spectrum of emotions.  I'm learning to ride the ride of all the emotions, and know they won't harm me.

This is the stuff that life is made of.  I have a very hard time just sitting with other people's disappointment, frustration, anger and over time, I have learned not to take it personally.  Sometimes, they just need to vent. AND I don't have to solve the problem either.  People just need to be heard. 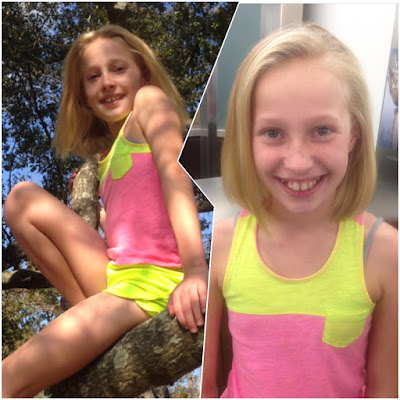 This is a huge factor in life.  People want connection and to be heard.  And sometimes I do it better than others but I try to listen to my loved ones.

(And they did end up liking their hair, it took a few days to set in... and we have learned the golden rule of really communicating with a stylist.) 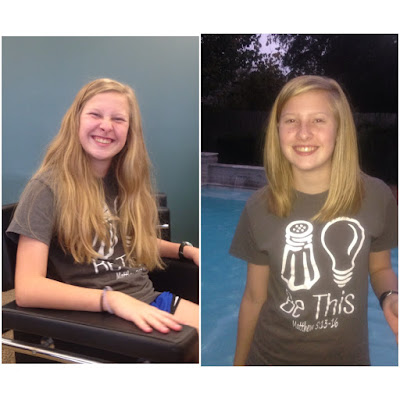