A Girl and Her Dogs 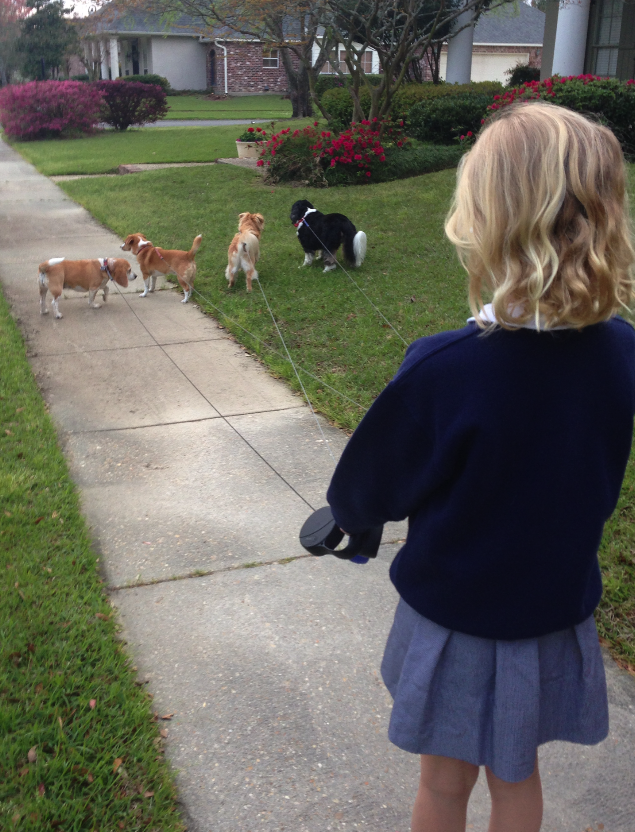 This morning before school, Mallory got out of bed without any prodding whatsoever.  She was so excited to help walk our neighbor's dogs.  Last night, she walked them with a wet head from her bath.

This girl loves her dogs.

She wore me down endlessly asking for a dog in 2012.  We finally got one.  And then when that one was scared of George, I felt bad about a man not having a dog that loved him.  And Mallory was asking for another dog anyway, so we got another one last year.  And Brinkley LOVES George.

And they sleep in our bed. And sit on our couches.  And I had to learn to be the alpha of the house. It has not been an easy journey.  And that's not even mentioning the carpet that needs to be replaced.

But this morning as we raced to get out the door to have time to walk them before school, I catch Mallory's perpetual enthusiasm for her dogs and her dogs' friends.  Riley does too.  Mallory makes comments the whole time about the dogs and their personalities and how they walk and their relationship to each other, etc.

When you LOVE something so much - it spills over.

And other people get caught in that energy of LOVE.

When that energy of love is put out there, it comes back to you.

The small but powerful act of Living In the Present Moment is huge.
A dog walk can be the best beginning of the day.

I've lost my voice with this blog for a bit.  I haven't written in a while and I truly LOVE to write.  It is so cathartic for me.  So I am forcing myself to write this.

I shared a bit of my authentic self on Facebook.  I linked a blog that had taken me many years of soul searching to write. But it had to do with religion, addiction, being gay and the movie, "Twelve Years  A Slave."  Hot button issues to write about in the Deep South Bible Belt.

After posting the link to my blog, I was pleasantly surprised that there were positive responses immediately.  I would like to say that it shouldn't have mattered but knowing someone else understood and had the same opinion was gratifying.  It is my truth and I have worked so hard to get to the point of saying it out loud…well at least in a blog.

And then about a week later, I realized that one person was not pleased with the blog and needed to not see my "stuff" on FB and defriended without a word.  I was saddened and angry because of who the person was but I remind myself that the reaction that comes back to me has to do with that person.  It's their stuff.


This blog is my truth and I have worked so hard to come to know what I believe at my core.  And I am learning bit by bit that I don't have to have anyone else agree with me either.  And to take it a step further, I can be friends with people who don't have the same opinion as I.  It is called, "Agreeing to Disagree."

In my journey, I had to figure out that I was a people pleaser - this was kinda shocking to me as I have progressed out of it, how deeply it went.  I had to learn what boundaries were.  First, I had to have the awareness that I was a people pleaser and what the hell boundaries were and that I needed them,  desperately.   I believe that I had to understand where I came from so I could move forward.  And moving forward to owning my own thoughts, words and actions is so freeing.

The irony with this particular situation of defriending is that my journey to figure out my authentic self, led me to a deeper relationship with God and his Divineness within me, always available to rely on.   And that Divine within is all about love, not judgment. And this person and I just disagree about the "rules" of the God we both believe in.

So I'm back.  I will stop here.  But my journey has to continue whether anyone agrees with me or not.

It is well with my soul.

That's All There Is To Say 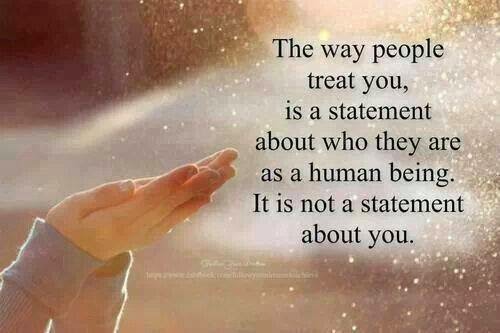 Labels: Acceptance, Boundaries, Self Care, Self Worth

This meditation speaks to me sooooo much.  I've underlined what meant the most to me!

Splitting the Idealized Self
from the Shadow Self
Friday, February 28, 2014

The fourth split is when you split your acceptable self from your unacceptable self. You build a persona, a self-image that is based upon what most people want from you, reward you for, and what you choose to identify with. At the same time, you repress and often totally deny your “shadow self.” Your shadow is what you refuse to see about yourself and what you do not want others to see. Jesus simply calls it “the log in your own eye” (Matthew 7:4). It’s fully there, but you just can’t see it. And even worse, this unworthy instrument becomes that by which you see others (which is why you tend to dislike people who are just like you!). “The lamp of the body is the eye” (Matthew 6:22), Jesus says, and you need to clean the lens to see truthfully. Much of the work of spirituality is becoming aware of the biases, prejudices, and limitations through which you see the moment. It is a lifetime of painful work. It never ceases, because the ego never totally abandons its throne.

Jesus was a brilliant psychologist. He really was. He says you must clean not just the outside of the cup, but mostly the inside (Matthew 23:26). I would say that the major reason why so much religion is a waste of time is that it is mostly about external actions, rituals, and behaviors, whereas Jesus focuses very strongly on the internal (attitude, motivation, intention) and actually minimizes the external. Only an inner life of prayer helps you to go where Jesus invites us.

This split from the shadow self reaches full force in the teenage years, but many never recover. Young people are just so eager to be acceptable to their peer group and to “look good,” but unfortunately a lifelong game has begun. Carl Jung said that people who just look outside are dreaming, but people who look inside are “awakening.”

Both the idealized self and the shadow self can blind one to their best and deepest self. This, ironically, is a “field of both weeds and wheat” (Matthew 13:24f) that for some magnificent reasons God not only fully accepts but even loves. It is only we who refuse to live in this field. Rumi, the Sufi poet, beautifully says, “I will meet you there!”


Adapted from Franciscan Mysticism: I AM That Which I Am Seeking
(CD, MP3 download),
Immortal Diamond: The Search for Our True Self, p. 29, and
Falling Upward: A Spirituality for the Two Halves of Life, pp. 127-128

Posted by C Golightly at 9:36 AM No comments: