Allowing Persons (and Dogs) To Be Who They Are 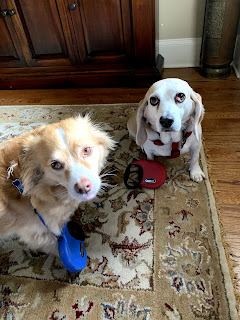 These are my buddies.  I never had an inside dog that I bonded with until this beagle, Annie, on the right.  A year later, we adopted the mixed breed, Brinkley because Annie was fearful of George.  Brinkley has taught me unconditional love and Anne, well, she has increased the amount of laughter in the household immeasurably.  In the past year plus, the teenage girls in the house obsess over Ann (the name they began calling Annie)  I have to send pictures when they are away from the house. They come and greet her, and ignore Brinkely. I don't try to understand it, I just roll with it although Brinkley is so much more responsive in every way unless it's the food bowl.

It is my job to walk them in the morning. My husband, George walks them at night. Sometimes on the weekends, he walks them both.  We had a brief conversation that I would walk them today.  I became busy with stuff inside and George was busy outside.

And then I tried to walk the dogs.

Brinkley was raring to go in his youthful self. Annie not so much. After her vet appointment yesterday and with the evidence of her ever whitening fur coat, we know she's reaching her elder years.  We don't know her exact age, but now there is a heart murmur ( And an every present cherry eye that no longer ruins my appetite.)

So Annie very reluctantly comes to the front door when I call, but we don't get very far in the walk and she is not budging.  Brinkley is way ahead of me, and Annie is lagging way behind.  A jogger going by, laughed and said, "Resistance." I laughed, and said yes, she is resistant.

And then a magical thing occurred... I accepted it.

I accepted Annie for who she was in that moment.

So I accepted it.

I know this is a dog but you know ... I have fought with this dog a lot, early on. She peed on my carpet and ruined it on one side of the house. I did not like her for a long while.  She tried to escape several times, and it came to a point, that if it wasn't for the chip that identified her as ours, I would have let her go.  I had to learn boundaries with her.  And once that was established, LOVE.

Also, she might be sore from her shots. So I dropped her off back at the house and continued with Brinkley. But he was acting weird too.  He was choosing to lay down on the ground and rub his back on the grass multiple times.  He looked ecstatic in these actions.

Then I get the text from George and it all made sense.

So much for communication.

What I took away from this little escapade. People (and dogs) will show me who they are in the moment or on an ongoing basis.  I am learning to believe them. Even bigger is to accept them for who they are and know that it is not a reflection of who I am.

That is the kicker.

It is not a reflection of who I am. 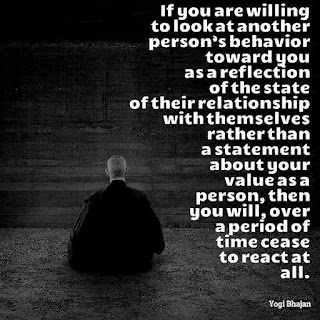 I didn't even get mad at George.  It was funny.