Yellow Kitchen Gloves & A Mask (The Great Louisiana Flood of 2016)

I still feel a little nauseous at the thought of food this morning.  And yet, I am in a cool, dry, safe air conditioned home and so very many in South Louisiana are not.  The number of gallons of water that fell in one week in South Louisiana was 6,900,000,000,000.  Tens of thousands of homes were flooded and need to be stripped before mold begins growing.  Yesterday, I went for the first time to a flooded area and it will stay with me for quite a while.  The devastation has ripped across South Louisiana and it is going to take quite some time to recover.  Stress is palpable as is good will. 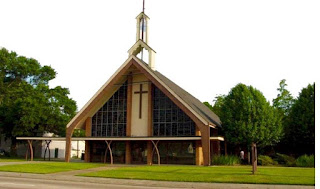 My older daughter and I had a National Charity League meeting which happened to be at our church yesterday morning.  For the last week, everyday through my Facebook feed,  I have seen the exquisite needs of so many people, from rescuing out of homes, to now the necessity of houses needed demo'ing.  And it can be overwhelming to see the volume of need for the sensitive soul that I have come to understand that I am.  I read that one focus of the many of my church this Saturday morning was on Hope Community United Methodist Church on Evangeline Street in north Baton Rouge. This seemed like a logical step for me as it was not far from where I would be.  I wrote a blog a month ago about stepping out of my comfort zone helping with home repair after the shooting death of Alton Sterling in the northern part of the city and the hug that I received from the homeowner.  I have wondered if North Baton Rouge is going to be left out during this recovery.  Resources are just not the same.

I invited one of Riley's friends who was at the meeting to go with us.  I'm not sure if she will ever go with me anywhere again!  We made our way to the church on streets with the tell-tale large piles of flooded home contents along the way.   We began to see a familiar face or two from our church, found our lead pastor who told us to find Tom Edd.  We found him and learned he is one of the pastors and said we MUST have masks and gloves.  Riley and I broke three masks between us because they were inexpensive and I felt guilty for that because it had been hard to find them.  We got suited up and it was explained that much of what was going on now was heavy lifting but that a freezer and refrigerator needed cleaning out now before conditions worsened.  We were in the daycare area of the church and our first task was to remove large blue mats used for napping and I knew the girls could handle that so I tackled the freezer. 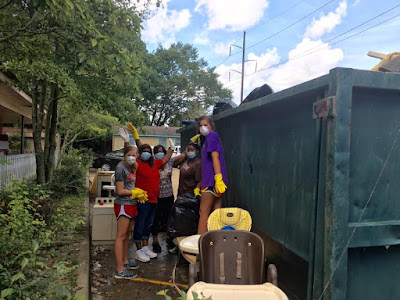 The sight and smell of this area and the visual of the brown liquid (sewage mixed in?)  and flying bugs of the freezer will stay with me for a long time.  Bit by bit with small blue buckets, I removed the soggy contents of this overturned deep freeze and took them outside to "our dumpster."  The trick was to get things in there without the brown liquid slinging on myself or others.   After a while, two more friends from church appeared and we began to work in tandem.  My yellow kitchen gloves were wet on the inside and out, and I didn't want to touch anything but what we were removing.  The heat of an August summer day in Louisiana wasn't so terrible as we were mostly in the shade of the building but my nose and mouth inside the mask was hot.  And after a while, I could feel my nose dripping.  There was a feeling of not being able to breathe.  I began to feel a little nauseated after removing all of the contents of the freezer and took a break.  I pushed the mask up to feel like I could breathe, but then the stench overtook me and back in place it went.  We began removing bins of heavy wet papers and balanced on chairs to get the contents of the bins into the tall dumpster.  A few doors down, the girls were helping Mrs. Woods who ran the daycare to clean out an office.  Every few minutes, I began to feel overwhelmed in the heat and the smell and knew that after an hour and a half, I could not stay much longer.  Time stood still in this place of God.   Every minute seemed like five.  I also worried that my child would never go with me anywhere again when I asked.  She has a terribly keen sense of smell that I knew was being overpowered as was I.

It was time to move on, and we tried to find a place to wash our hands and did.  Mrs. Woods was in there with her two co-workers.  It has taken me a long time to learn how to speak up when the occasion calls for it.  I wanted to tell them what a great job they were doing and lift them up just a small bit in this time of devastation.  This is what my heart saying but it doesn't come out of my mouth.  I told the ladies that I was so sorry they were flooded.  As I began to try to use my words to say what a good job they were doing, one by one they stopped what they were doing and walked across the room and hugged me.  They hugged Riley and Cooper.  We each said, "God Bless You."  And we all carried on.

There seems to be a thing with me trying to "help" others and receiving hugs in the process.

If you want to support relief efforts, my home church is one of many leading the charge and any money you send will go 100% to recovery.

Posted by C Golightly at 6:27 AM No comments: