Use the Heart not the Head: Curiousity, Compassion, and Connection

I have been listening to a Mary O'Malley video clip from The Psychology of Eating Online Conference.  I have listened a few minutes at a time over several weeks.  Today I am hearing it with new ears.  I'm having another big aha.

Her book is called, "The Gift of Our Compulsions."  Instead of being angry about using food compulsively, I'm beginning to feel a shift.  Mary says that the compulsion is there to bring attention to what you are not ready to be with.  Most people live their lives running with their compulsions and have no idea that they are doing so.


“Don't turn away. Keep your gaze on the bandaged place. That's where the light enters you.

I have been very angry at myself for a long time for always using food to avoid my pain.  I beat myself up over it.  I judge myself.  Why can't I get this area of my life under control?   I have felt so empowered in so many areas but this food/weight thing persists.  And then Mary talks about being curious as opposed to trying to control it.   She discusses what I call the three C's: compassion, connection and curiosity.   She goes further to say these are HEART functions not head.  I get lost in all of the head stuff - the whys, the hows, etc.  I can ruminate in rationalizations forever.  I have been in touch with the heart and I've had glimpses and it is pure bliss.  I want more of that and I've had enough of the head stuff.

We are wired to struggle and our compulsions are there for us to avoid being in that struggle.  She also says we are dualistic in nature and that means black/white, right wrong.  We deem our compulsion as bad, so we try to beat it down.  We have been conditioned from very early to live in this war.  Father Richard Rohr also talked about dualism in his talk that I attended a few years back and it highly resonated with me.

Rumi's quote about the light and Ms. O'Malley talking about the heart speaks loud and clear to me.  The light represents a deep sense of well being.  Let me say that again because I need to hear it.

A deep sense of well being.

I'm not going to get that by losing weight or being able to buy the smaller size.  I'm not going to have that by looking perfect (and who is the judge of that, who do I give that power to?)  I feel the sense of well being when I have compassion with myself (and others!) I feel that when the negative thoughts start and I stop them and become curious about why.

I have experienced moments of deep well being and it has come when I detach from the controlling thoughts.  The moments come when I'm compassionate with myself and take care of myself.  They come when I connect with others who are on a soul journey too.   They come when I feel a shift of energy that feels like LOVE and not judgement.

I'm sticking with the 3 C's for now.  I think that will lead me the rest of the way.

I Always Think That I'm The One Teaching My Kids But... 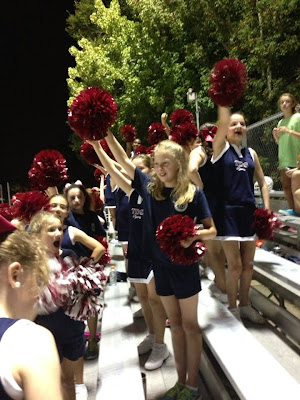 For the longest time, she hesitated to sign up for the pep squad.  I, "the old cheerleader," had been hoping for a few years that she would be interested in cheerleading as well.  I felt a very strong tug when I saw a group of girls practicing together or when we attended a high school game.  It was a deep yearning that I couldn't let go.

What is this deep yearning really about...

Just because I enjoyed being a cheerleader doesn't mean she would.  She is not me and she has her own interests.  But she would bring up pep squad from time to time when the other girls talked about it.  The two of us would discuss the pros and cons and where she stood.

And during those talks I learned to let my desire for her go.  Instead of me teaching her something, I listened to her talk about what she wanted and I learned something!

The extended "join the pep squad" deadline was upon us, and she brought it up again, which surprised me because I had let it go and thought she had ruled it out.  Although cheerleading is a sport - I would love for her to be on the field playing the sport, but it's her choice.  So I requested the final schedule to see what the exact time commitment would be as it was a major concern for my academic daughter.  (Woo Hoo on that concern!)

At the very final opportunity to join, I sensed a desire on her part but she was still hesitant. This isn't about me.  Hmmm.  What do I do?  Since she only had one other activity going on during the week, I encouraged her to try.  She seemed to need the push to get out of her comfort zone.

So we ended up at our first game last night. It was very exciting to see the smile on her face having fun.  This may be her only time with a cheerleader uniform on (well, when hers comes in because we signed up so late!) and I'm okay with that.  I may grieve it a little when the time comes but I want her to be who she authentically is and to follow her own interests because that is where her heart is.  And I need to pursue those things where my heart lies and get out of my comfort zone.

The game was a classic "agony of defeat" kind of night.  The other team scored on their first possession and kept going.   Our fifth and sixth grade boys worked really hard but the end score of 20-6 was not in our favor.   But let me tell you that "6" was SO exciting!!  It brought out the old cheerleader in me.  I stood and screamed (and stopped chatting) when I realized that we were close to the goal line!  It was a little deja vu and fun!

You don't have to have a uniform on to be a cheerleader. 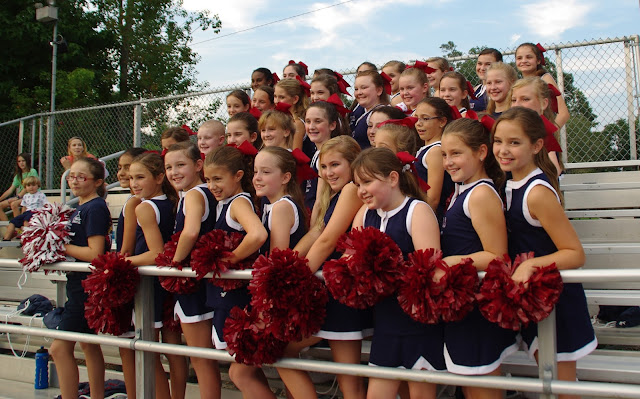 We Have Reached Our Limit of Four Legged Friends! 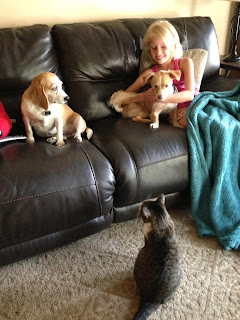 We have a new dog!  We fostered this little boy for a week and on Saturday completed the adoption paperwork.

Why you ask?
Mallory begged for another dog and I really wanted George to have a dog that didn't shake with fear and would come running to him.  And possibly, a friend for Annie.  We have named him Brinkley and he appears to be a mix of several breeds perhaps Pomeranian, Terrier, or beagle.  He has a very sweet disposition but has a little guard dog in him which is good.

How Brinkley is different from Annie: 1) The leg goes up to pee. 2) Follows me around all day long 3) On leash outings, he walks with his head up and RUNS for squirrels, cats, etc.  4) Is more brazen but still ultimately afraid of the cats. 5) Sits in high places. 6) Licks me all the time 7) Is more excitable and playful 8) Runs after the birds and squirrels in the backyard.

"It just surrenders to what it is"

"We are all tired. Really, we are. It’s a hard road, but its also a beautiful one. Perhaps we expect too much from ourselves and from others. Perhaps humanity can only make slow progress, like an inch worm. Perhaps we need to celebrate how far we have come more often. And rest more. And relish the simple pleasures. And look for love everywhere. There is a river near where I live. It meanders slowly, peacefully. It doesn’t ask itself why it isn’t an ocean, or a raging river, or some other thing. It just surrenders to what it is. Maybe we just need to surrender more to who we are. I think I will lie down tomorrow beside the river. And take a rest. And sweet surrender." Jeff Brown
Beautiful! <

Posted by C Golightly at 4:34 AM No comments:

The Irish in me fell in love with this poem...from my Sunday Morning class' latest book.

From John O'Donohue as printed in Eternal Echoes: Celtic Reflections on Our Yearning to Belong

Blessed be the longing that brought you here and that quickens your soul with wonder.
May you have the courage to befriend your eternal longing.
May you enjoy the critical and creative companionship of the question "Who Am I?" and may it brighten your longing.
May a secret Providence guide your thought and shelter your feeling.
May your mind inhabit your life with the same sureness with which your body belongs to the world.
May the sense of something absent enlarge your life.
May your soul be as free as the ever-new waves of the sea.
May you succumb to the danger of growth.
May you live in the neighborhood of wonder.
May you belong to love with the wildness of Dance.
May you know that you are ever embraced in the kind circle of God.

Posted by C Golightly at 5:23 AM No comments:

Yes, I Have Big Breastseses!

Oprah was recently on MY Andy Cohen's "What What Happens Live" show while she was promoting "The Butler."  I really enjoy Andy and several shows on the Bravo network. One thing that he does do is question his guests often about physical attributes especially regarding  plastic surgery and puts the focus on appearances.  This is where my desire to love myself as is, is in direct conflict with watching this programming.  I try to compartmentalize this issue.  But when Oprah came on, the physical issues hit the spiritual.  The following transpired on the show

The late night host asked Winfrey what she thought about her Butler costar Terrence Howard's comment about her "tig ol' bitties.'"

"It really is okay because they really are big," Winfrey said. "The other day I went, 'God, are y'all getting bigger?' These are my grandmother's -- she's with me."

Cohen later joked, "Not only does she have a bountiful garden, she has bountiful . . . " Winfrey quipped, "Breastseses!"

Oprah embraced her girls and it was a powerful moment for me.

To hear this exchange was relieving.  Oprah is a spiritual pilgrim and has led me to so many ahas through interviews with her spiritual teachers.   She is an amazing teacher and conduit.  She embraced mindfulness and spirituality years ago and tried to bring it to the masses but we were not ready.  All I know is I'm ready and open now.

And I have big breasts and much of the time I don't like them.  They get in the way and they bother me.  But they are mine.  They are a part of me.  And my mother has big breastseses too!  And if Oprah can laugh about it, I can lighten up!

You can laugh about having big breasts and be a spiritual pilgrim at the same time.

Oprah also joked about when she was little how she was scared of the enormity of her grandmother's bosom and how when she embraces children she makes sure to do it delicately.  I have to do the same with my own children.