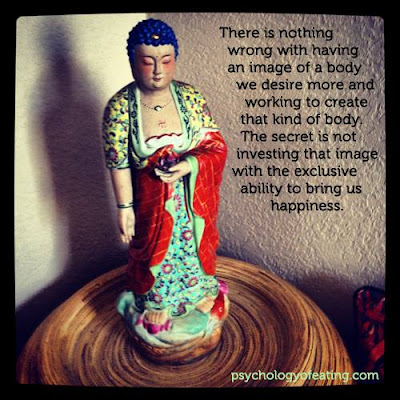 Oh, holy heck.  This one hit me right between the eyes.

Months ago when I went to the doctor and found out I had gained seven (more) pounds, for several days I felt like my life had taken a turn for the worse.  I have been on a path of enlightenment to lose weight, not gain it and this is putting me even further away from wherever my natural weight is.  (What is my natural weight? - that is still a mystery)

I can see how dramatic that was now but it worked into an aha moment that continues to sink in.  I wrote about in on February 22 and it was called "Seven Pounds and a Palpable Shift."

Walking around with the extra seven pounds and learning to accept and love myself "as is" is a HUGE (!) endeavor but one fully worth taking.  And the truth is that when I weighed less after dieting for about ten minutes,  my world did not change as I anticipated.  It was more fun to go shopping and get dressed but I still had the same insecurities and incessant thoughts plaguing me.

I still lived in fear on a day to day basis and at the whim of my feelings which overwhelmed me.  I didn't realize I lived in fear until I slowed down enough to realize it.   The last years of therapy and intense self examination have led to more understanding of where I came from, who I am authentically and most of all, how to handle my feelings and thought processes.  Shifting my thoughts from fear to love on a daily basis has been an incredible journey and one that I will continue the rest of my life.  Worrying about my looks and weight does not move me in a positive direction at all.  And most importantly, my weight does not indicate my self worth.

I have slowly come to realize that the inner journey "stuff" FASCINATES me, rocks my boat and that is who I am.  For most other people, not so much.   Ye that is who I am authentically. And that is okay that I'm different from other people.  Accepting this about myself is very freeing.  I beat myself up a lot over this one.  Now I become so excited when I find another person on the path.  The "inner journey people" are few and far between because one would have to slow down, stop the madness of compulsive activity that keep us from thinking and examine and that may be too painful to do.  Some people there have to hit rock bottom to propel them on the journey.   It is a painful journey but oh so freeing at the same time.

So, as I come across this picture and words on my Facebook feed, I had a happy dance in my mind.  Because that is who I am and someone else out there gets it!

Posted by C Golightly at 5:49 AM No comments:

Living with the Enemy

I caught the end of a Julia Roberts movie, "Sleeping with the Enemy" from 1991.    I remember loving the end of the movie back then even thought it was violent and that is not my type of movie at all.  As our damsel in distress Julia has the gun pointed at her mentally and physically abusive husband that she has elaborately escaped from, she calls the police and tells them to send someone as she has just shot an intruder.  She hangs up and then she shoots him.  Bam!  After he has one last theatrical attempt to grab at her, he falls down dead, for sure, this time.

This movie was very black and white.  The bad guy was clear from the very beginning.

What if that enemy resides within?  And what you need to kill off is your own thought patterns? I saw the movie and wished that the growth journey could be that straight forward.  Oh, how I wish it could be that straightforward.  And then I could dance around to "Brown Eyed Girl" which is one of my favorite songs.

I recently had a comment told to me about how good someone else's appearance was in regard to her weight and there is a history with the speaker.  It felt like a dagger.  This person's appearance or the speaker's opinion has nothing to do with me, but I immediately took it personally.  It took 2 days for me to gain awareness that the comment wasn't directed at me and it's my doubts about my own appearance that was the dagger.

I can now look at the dagger comment as "another f'ing growth opportunity."  And that's another growth to use the word f'ing because I don't like swearing either. Yet the plain words,  growth opportunity doesn't seem strong enough for how I'm feeling.  This summer, I'm a little tired and emotionally worn out and I need solitude.

In the end I am actually glad for the comment because I DO see it now as AFGO.  My self worth was really in the toilet a few years ago and I'm making my way out slowly and surely as I pay attention day in and day out and do the hard work.  In the movie,  Julia had to learn to swim and save her money over time in order to get to the point of escape. So even in the movie she had to work too!

The fact that the comment doesn't sting anymore and it only took 2 days and I don't blame the other person anymore is growth.

Bam!  The ego is dying, slowly ever so slowly and there will be many more theatrical attempts to grab me but I will continue to pay attention.
Posted by C Golightly at 11:08 AM No comments:

The summer is flying by but my period is not.  My last period started on June 29th and hasn't stopped.  Sixteen days ago.  Can I say how tired of tampons and my vagina that I am?

This song just popped in my head.

I go to the bathroom, see what is happening and then hang my head.  And think, "Really."  "Please stop."  But it just keeps going.  It has not been heavy thankfully.  I have talked to my pharmacist and doctor in the last days to help figure things out.   I have been using progesterone cream for many months to help with being estrogen dominant.  My body stopped producing progesterone as much.  I had heavy bleeding during my cycles for over a year and had become anemic.  This is the first time that a cycle has been so long.  I hear that this happens to many women of the age range that I am in.  Hello Perimenopause, you keep bringing surprises.

This is something that allows me to know once again, I am not in control. And these are two thoughts that have popped up:
1) I'm not sure how long I want to keep my uterus and
2) I don't want any man telling me what to do with my body, especially a Republican. : )

I am making progress in evolving my mind but it takes time and the progress is slow but I catch small glimpses of it here and there and VBS has always been fertile ground for growth.

This year due to happenstance of being in close proximity to the VBS director one Sunday morning, I asked for an easier job with less hands on interaction with the kids.   Some weeks during the summer, depending on how much self care I have had, I can feel like I'm on the brink of losing my mind.  I KNOW I need
And thankfully she obliged.  I now understand the directors each year want to keep their volunteers happy.

She put me in the Story Room as an Assistant to the person who leads a science experiment.  It was a less intensive job except for the worry that my leader might not show up and I would be on my own.  I had that thought every day that I would not want to do that.  Why do I think I am supposed to want to do that, because after watching friends that I know are teachers act out the stories, and quiet the children with certain techniques.

I was still thoroughly exhausted as the week went on but I was not angry, paranoid, etc as I have been in years past.  I even brought kids from the neighborhood which was fun for me and for my girls.

Mallory was disappointed that I did not lead her class as a guide but she got over it.  This is taking a page from the "Let me disappoint you" guidebook.  She got over it and other people do too.  I had that same aha again.  I have to work VBS one more year as I volunteered to be on Children's Council for three year and it's part of the job.  And then I may take a break.  I will figure out what I want to do.

Posted by C Golightly at 2:44 PM No comments: