Because I Knew You

I first heard the song, "For Good" on the Oprah Series Finale as sung by Kristen Chenoweth.  I got chills, as it was so powerful to watch the men that Oprah had educated walk by with candles.  It was an amazing energy coming through the tv screen that I could not deny and I teared up as Oprah received gratitude from the Morehouse men, her viewers and friends.

I had never heard the song but it blew me away.  I eventually downloaded it and listened.  It was from the musical, "Wicked."  As GaGa was losing her cancer battle, I listened.  The reputation of a mother in law is not always a positive one.  And the relationship with mine, evolved greatly over the years.  In the early ones, all was well as she lived far away in Massachusetts.   The closest in proximity we were was 7 hours away during our Buffalo stint.  A few years later, she was a widow and ready to move to Baton Rouge where we were.  I was frightened.  She didn't drive and hinted at wanting to live WITH us.  {gulp} When she would come for her two week visits which were ten days too long for me, she acknowledged my lack of perfectionism in home related matters.

I had not learned yet that these comments said more about her than me.  If I had been okay with who I was, then the comments shouldn't matter, but they stung at the time. 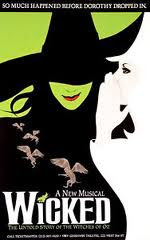 Yet, she ended up in a fantastic retirement community ten minutes away and made friends and had experiences she was unable to do previously.  We worked things out.  She spent a lot of time with us at our house on weekends, and even travelled  together.  She loved my kids almost as much as I do.  As her health declined we actively discussed that "we were good."  There was nothing we needed to hash out.  She had taught me household tricks even as I wasn't really paying attention, but evidently I had listened.  In one of our last heart to hearts, she told me that I softened her.

Wow, what do you say to that?

Yet, she taught me one of the best lessons ever.  We would discuss issues at hand and then agree to disagree.  It wasn't so outright at first but over time, I realized what was occurring.  I had different opinions than her and after the conversation, we carried on as usual, with no repercussions.  Wow.  That was life changing for me.

GaGa's birthday was May 15th.  We had chocolate cake with candles and sung Happy Birthday.  She would have been 81.

This afternoon, I'm very excited to see "Wicked the Musical" for the first time.  The last song of the show is....