This weekend I heard a blip about Arnold Schwarzenegger and his new book and when Maria found out about the affair and the son he had with their housekeeper.  What startled me was that Maria found out during a therapy appointment as the therapist announced to Arnold that Maria wanted to know if that was his son. For me, it was that the therapist addressed it with Arnold and not Maria directly addressing Arnold.  In my mind, Maria was a tough cookie and would not have to have the therapist address it.  She's a Kennedy, for gosh sakes.  She's been a journalist. She's been friends with Oprah for years and years.  Why didn't she go to him directly or ask him directly in front of the therapist?

But none of those factors of being a Kennedy, etc. make her super human.  That was just my interpretation and gosh knows, I have had wrong interpretations about other people and more importantly, myself.  I have tended to put some people on pedestals.  And when I put other people on pedestals, that means they are above me.  Somehow, they were better than me, more together, had more friends, thinner, etc.

And I did not need to do that.

It's a really profound realization that everyone is equal.

Really, everyone is equal.  Some people have more money, nicer house, power, etc. but they are equally as human as the rest of us.  God created "them" just like he created me.  They put their pants on one leg at at a time.  They have to pee and poop just like the rest of us.  They will need a colonoscopy one day if they live long enough.

Maria had inquired about Arnold's infidelity but he had not responded truthfully and she used a third party to finally get to the truth.  No one really knows the truth about another person's marriage except the two people in the marriage.

I have been using a "third party" to come to the absolute truth that I am lovable, worthy and there are no need for pedestals.

It's a work in progress but one that I am learning to embrace.
Posted by C Golightly at 10:43 AM No comments:

The Bow Came Off

Your pain is the breaking of the shell that encloses your understanding.  ~Kahlil Gibran

Wow- Chewing on this one a little bit.  I have had this post sitting as a draft for a few weeks and I had to, in order to fully accept the truth of Kahlil's statement.

The last two weeks, I came face to face with some lessons that I had visited and thought I had conquered already.

Just when you think you have a deep personal truth wrapped up with a bow on it...Here it comes again, unwrapped.

One of my friends pointed out evolving is like a spiral and you do encounter some of the same issues again but at a different level and perspective.  I thought, geez, I had already covered this ground.  I thought I had moved on but alas, I had to revisit some core issues.  The good thing, is that it didn't hurt quite as much as it did the first time and I was able to come to the understanding sooner but evidently it was needed again to continue my journey.

But I felt broken open and raw for several days.  These are not fun feelings to go through.  I would have done anything in the past to NOT feel that way, but now I see it is all part of the process.   Pain is inevitable in life.  It's how we waddle in it or learn to move on from it that makes all the difference.  I have been a waddler for a good portion of my life and now I'm gaining the skills to move on and actually gain strength and understanding from the pain.  It's new territory, it's not easy and it takes time to learn the skills  but it feels very freeing in the long run.

Postscript:  Feeling pain feels so monumental to me and I think today I was reminded why. My therapist told me that we as humans will do anything to avoid pain.  The research is there to back this up.  Even more than a desire for food, we will work harder to avoid pain.  I guess this answers why the journey of awakening that I'm on, is not a popular one.  But I am so thrilled when I find other pilgrims along the way!
Posted by C Golightly at 4:47 AM 2 comments:

"Can't Even Talk About It"

Having one of those days where I am feeling raw feelings.  I walked past this Modern Family repeat episode and it made me smile enough to find it online, record, and upload to You Tube.  So here it is.

Posted by C Golightly at 6:57 PM No comments:

I feel giddy that I found this manifesto this morning and I was absolutely wanting to jump up and down when I read it.  This is from Brene Brown and it says so much of what I am absolutely trying to do with my children and for myself!  You first have to love yourself wholeheartedly before you can share that love with your children (and everyone else!)   This is fantastic!  I wish I could make it a bigger font but this is as large as I could get it. 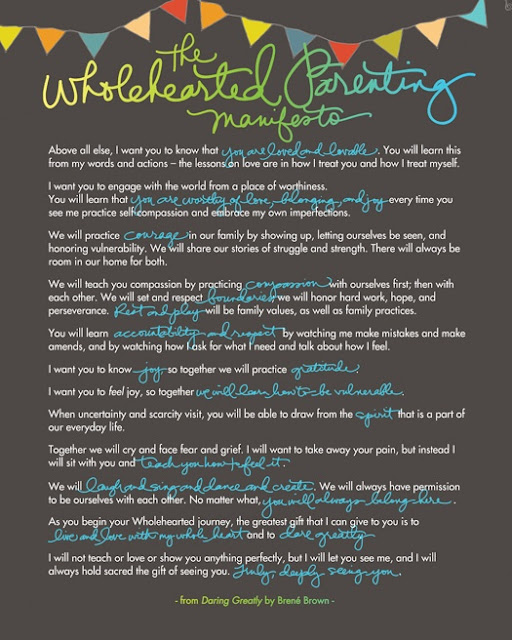 Posted by C Golightly at 7:55 AM No comments:

"Everything you done to me already done to you"

It's been many years since I watched the Color Purple and it touched me back then but I want to watch it again coming from where I am now.  I am watching the latest OWN LifeClass and Oprah acts out a line in the movie. And this is it...
"Everything you done to me already done to you"

This brings me to this topic which is I have been wanting to write about for some time.  It is Newton's Third Law of Motion - better known as action reaction.  For every action there is an equal and opposite reaction.  The energy you put out is coming back to you.  Some people call it Karma.

In an emotional way, it is when someone snaps at you - you want to snap back.  When someone is kind to you, you feel calm and have good feelings.  And on a larger level in your life, Gary Zukav explains it so well in this really short 50 second clip.

I have found this to be true.  In that, I have learned to be more open and loving and in comes back to me in the most random, unexpected and wonderful ways.  Just yesterday, in the past, I always have worried about making plans for holidays.  They make me feel lonely.  Labor Day is a holiday, albeit a minor one, and as George was working, the girls and I decided to go swimming at our club, and at the very last moment invited friends and they were able to come.  It was such a pleasant time at the pool.  I could not have pre-planned it any better.

But I had extended this invitation to them freely.  In the past, I would have been so hurt had they not been able to come. Now, I understand that I don't have to take it personally if they can't come, it is just circumstances.
I am so much more open now because I am stronger.  After our friends left, I had the blessing of running into a friend from church and we connected for just a few short minutes but it was packed with meaning.  We covered life's deepest topics in 10 minutes and then we departed.  I find that when I'm open and vulnerable somehow I meet up with other open and vulnerable people and the connection with others that I so desire just magically happens.  I have watched this happen so many times, I have become a believer.

I do believe now in Newton's Third Law especially as it applies to relationships.