This morning as I eased my way out of bed in a fog and the darkness of the newish Daylight Savings time change, I looked down and noticed I missed stepping in cat hairball throw up by mere inches. 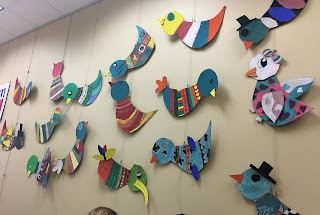 There is a significant chill in the air on this March morning in south Louisiana. One that I celebrate and adore before the heat and humidity begin kicking in all too soon.  I love that I have to put on George's long heavy robe to bring the dogs outside.  I take them in the darkened back yard as the sun is barely coming up on the front of the house. I had to turn the outside lights on to be able to see.  Annie has done her business on the right side of the yard and receives her expected treat.  I have been training Brinkley to go as well.  We are on the left side of the pool near a dark corner.  As I am straining to see whether his leg has been lifted,  I look up and notice the beautiful moon shedding a faint light in the darkened sky.  It took a few seconds to orient that it was the moon!!

I check his leg and I gaze up again at the moon, trying to experience it's magnificence and I'm startled by the sight and the sounds of by a flock of birds flying in formation which the view of, had been previously blocked by our shade tree.  Breathtaking!  I look down again and there's dog poop on the patio.

There is unexpected beauty while dodging dog poop.  I may not be awake enough to catch it every time but when I am, it's always a thrill like it's never happened before.

Do you know what I'm saying?

Some days, I have no energy from running here and there or in place with whatever is necessary in mine and my family's life.  My mood is low and I feel I'm not enough.  I used to be scared of these kinds of days. I have now become accustomed to the fact that those feelings will flow and my energy will return and my mood will rise.  And sometimes, the next day I will wake up more rested and ready to spot the light of the moon and hear the unexpected honk of the birds in flight and marvel and miss the dog poop and celebrate.

Namaste.
Posted by C Golightly at 7:18 AM No comments:

Labels: Allowing Feelings to Flow Through, Being Present, distraction, dogs, gratitude, Mindfulness, Self Worth

Life is Full of Curves

I have two daughters, three years apart.  They could be no different from one another.  Why do I think that they should be more alike?  For some reason I do. On a daily basis, it comes into my head, and I take note of the differences.   One helps me get out of the house on time, putting unbelievable pressure on me to do so, while the other has no concept of time.  I have to remind myself to get my behind in gear with daughter #2 because we will never leave the house if it is just us two.

One loves to do her hair and makeup and is into clothes and could shop and spend money for hours.  The other could care less and does not want to spend money.  One can easily start a conversation with a stranger, the other not so much.  One is always on time, knows exactly what is on the agenda and how things run.  The other rolls with it and flies by the seat of her pants a lot.

And the Big bad truth is that I need to let them be who they are.

This is a tall order.  But I am working really hard to do just that.  Over the last few months, I had to explore one important issue that could mean big changes for the whole family in order to let one child be who she is.

My oldest daughter has had a hard time fitting in at her current school.  Her personality is more quiet and shy and with different interests than most of her peers.  She has tried to fit in.  Middle school for girls can be cruel, period but, especially when you are not like the other.  It is all about fitting in, but what if you don't?   Throw in social media and it can be a nightmare.  The school that she has attended for the last ten years, happens to be on the smaller side.  There are only 18 girls in her grade with 32 boys rounding it out.  There is not much place to turn to find female companionship.

At the beginning of the school year, she was already burned out and begin to make comments about not wanting to go to school.  And she loves school.   For the last few years, I had asked if she wanted to look into other schools and that high school would be the best time to do so.  I never really thought she would say yes.

After many, many conversations, a lot of exploration, school visits, and months of waiting on admissions: we are starting high school at a brand new large girls' school in August.   There are around 275 girls per grade.  I'm ecstatic that she gets to explore new territory and find girls with similar interests.

My other daughter is happy as can be where she is.

So I will now be driving to two different schools and dividing my loyalties.

I never saw this coming.

I have grieved that one daughter will be leaving the only school we have known for ten years and the sisters won't be at the same school anymore.  I will absolutely move through it because I am a thousand percent positive this is our path for now.

Life is full of curves.
Namaste.
Posted by C Golightly at 7:39 AM No comments: